Everybody can enter Pridnestrovie without a visa, this is valid for citizens of any country in the world. There is no visa regime in Pridnestrovie (Transnistria).

The only requirement is a valid passport and the address of your accommodation.

Note: since the country is landlocked and doesn't have an airport, you need to enter from Ukraine or Moldova. Depending on your citizenship, a visa may be required to enter these countries. Citizens of the European Union, the USA and many other countries don't need a visa. Make sure to check on the official websites for Ukraine and for Moldova.

Since the country is landlocked and doesn't have an airport, you need to enter from either Ukraine or Moldova. Depending on your citizenship, you may need a visa for these countries. Citizens of EU countries, the USA and many others don't need a visa. Make sure to check on the official websites of Ukraine and/or Moldova.

Crossing the border and rules of stay

You need to cross the border at one of the International entry points.

To find more information on how to get in from Ukraine or Moldova, check Transport. 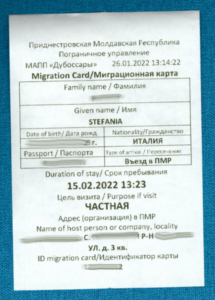 An example of migration card (thank you, Stefania)

When crossing the border, just hand your passport to the officer. You should tell him/show him the name and address of your place of stay, and how many days you want to stay (add an extra day to avoid trouble since the time is counted in multiples of 24 hours and precise to the second). Any duration between 10 hours (transit, doesn't need a place of stay) to 45 days (maximum available).

You will receive a migration card like the one on the right. Keep it preciously, as you have to show it to exit the country.

If you run out of day on your migration card (or got the duration wrong at the border), you can go back to any border-crossing or to a migration office in the main cities, and ask to renew it (up to 45 days at a time).

While you can theoretically renew the card indefinitely to remain in Pridnestrovie, you might have some troubles in Moldova as they consider the republic part of their territory. If you intend on staying long-term in the country, you should seek legal advice first.

The official currency in Pridnestrovie is the Pridnestrovian ruble (RUP). It is the only currency accepted in shops and restaurants.

Since early 2020, international bank cards such as VISA and MASTERCARD don't work anymore in the republic. It is advisable to bring enough cash for the duration of your trip and exchange it little by little according to your needs (US dollars or EURO are the best options, although Moldovan Lei, Ukrainian Hryvnia and British pounds are also accepted in any exchange office). The Pridnestrovian ruble cannot be exchanged outside the country, so don't forget to exchange the leftover before leaving.

Banknotes in use in the republic

In case you run out of cash, you can head to the border with Moldova in Bendery (Varnitsa) or Rybnitsa (Rezina) and use the ATM on the Moldovan side. Western Union is available in all Pridnestrovian banks and can be used for emergencies as well.

If you decide to buy a travel insurance, you might want to check if Pridnestrovie (Transnistria) is included. It might be included in (or excluded from) Moldova.

Emergency healthcare in Pridnestrovie is free for everybody in state hospitals. Minor injuries can also be treated in smaller dispensaries. (Note: very few doctors can speak English, so you might need a translator to assist, which can involve some extra cost.)

However, some complex operations might not be available, and/or you might prefer a better level of comfort in case of an prolonged stay in a hospital. There are international hospitals in Moldova and in Ukraine, where you can be transferred in most cases. They are usually expensive (for anybody outside the US), but would most likely accept your travel insurance. There are also two private hospitals in Tiraspol.

Medication is usually inexpensive and can be bought without prescription. Some specific medication might not be available on the spot and can take a couple days to be imported.

Despite the warnings on most foreign governments' websites when it comes to Pridnestrovie, there is no specific concerns about safety in the country.

Street crime is almost non-existent, and walking in dark streets at night is not a source of concern. Pridnestrovie is actually much safer than most Western capital cities.

It is true that consular protection might be limited in the country. This is mostly due to the non recognition of the country by most foreign countries, which means the absence of embassies or diplomatic personnel in the republic. Many embassies have some kind of relationships with the government of Pridnestrovie, as they meet from time to time and some even supports projects on our territory. The lack of consular assistance might be attributed to political posture rather than real capabilities.

In a general way, as long as you follow local laws, there is nothing to worry about.

Please note that narcotics are banned in the country, should it be for personal consumption or for trading. The law is extremely strict on this point, and the same goes for neighbouring Moldova and Ukraine. If you try to introduce any illicit drugs into the country, you may face serious charges.